The oldest of Joshua Stormborn’s two younger sisters, Alyssa is a dark beauty who has devoted her life to the Order of the Aqualine Cross in the city of Gate Pass. As the result of a taboo intimate relationship with her brother, relations between the two were strained. Their father Zanen, upon becoming aware of their illicit affair, used it as leverage to coerce Joshua to retrieve one of the Tears of the Dragon from the Tomb of Averden, which he later bequeathed to Jasmine in preparation for her coming confrontation with Leska.

Following the tragic and public assassination of her brother, Alyssa’s current whereabouts are unknown. 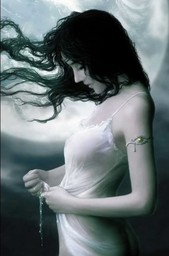